With the Covid-19 crisis keeping the world busy for more than a year now, life changed. In the Netherlands, we need to comply with a ‘smart Lock down’, limiting social contact as much as possible. Which is tough for us all.

But there are upsides too. Companies and individuals are developing great initiatives all over the world. My girlfriend is very happy that all kinds of chores get done like painting the house, tidying the garden and finishing my self-made media cabinet.

And, more importantly, I was finally able to pick up one of my hobbies… Home Automation!

It is fun. It is convenient. You end up having more time for other things. In my case though, in the beginning, I needed to persuade the family a bit, because they are not into tech stuff that much. Luckily a lot has happened since.

They’ve gotten used to home  automation, and now they are even annoyed if automation doesn’t work anymore. They often forget that the lights still do have a switch, and if your voice assistant doesn’t understand you, the switch is still an option 😉

Start small! Do not buy a lot of stuff at once! A lot of people start with an Amazon Echo/ Google assistant and a set of light bulbs. If you enjoy the small automations you can increase the number of lights slowly and start thinking of other automations.

When you enjoy these first integrations I promise you, the next steps will follow soon!

A smart home starts with a solid infrastructure. In my case, a good wired and wireless network were very important for our new house. I used to have just the modem from my ISP, but my new house consists of tons of concrete and steel. So multiple Access Points (AP) became essential for all floors.

I bought the Unifi APs, because I think they are one of the best APs on the market. They call it prosumer grade devices. You can install and configure them quite easily without deep dive networking skills. Are they a bit overpriced? Yes a bit, but totally worth it for me.

What I like about Unifi is their dashboarding. Which also works as a good marketing tool. Because if you only bought the APs the dashboard shows red colours/ NA on the switch & firewall/ modem side. So you guessed it: you will buy those as well! I did…

Since standardizing on Unifi, my number of smart- and connected devices grew fast. Notwithstanding the fact that I hardwire everything if possible! 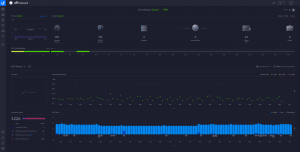 Everything on green, just the way we like it.

The first steps took me over 1,5 years, because I wanted to see what practical uses I have for automations. Also, I wanted to keep the end boss at home happy and not buy too much stuff at once 😉.

I then started to look at other devices besides light bulbs, and began to think about a controller. The controller is pretty much the heart of your Smart Home, where everything comes together. In my case, after some research, I decided these specs are important to me:

These specifications narrowed my choices down, and I ended up with SmartThings which at the time was growing fast in the US. Later on, it was acquired by Samsung.  I have the controller for over 4 years now, and many new players have joined the market since.

If I would need to choose again I would also look at Homey (which is a Dutch scale-up by the way) and Home assistant/ Hass.IO.

Along with SmartThings I choose Amazon Echo as my preferred voice command platform, and I also have some Google assistant devices. 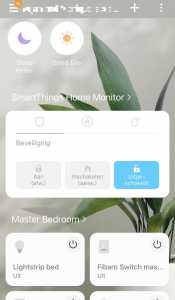 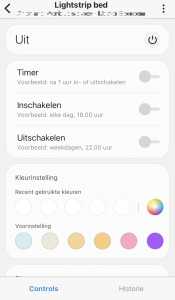 I like Samsung SmartThings because it is compatible with a lot of brands and types of smart devices. It is easy to set up, it has a family friendly UI and it is actually pretty stable.

It also has a development environment in which you can write custom (complex) automations, and write your own device handlers. Which can be convenient if certain functionality is not supported out of the box. Also, there is a big community to fall back on.

To give an impression of what custom code for a third-party device handler looks like, here is a snippet for a Fibaro Smart Dimmer:

Unfortunately, further development of the SmartThings platform has been a bit slow lately. New devices that work out of the box are added, but not at the speed I would like to see. It looks like Samsung has an ever-growing say in matters, and that doesn’t make it better per se.

I sure hope Samsung does not follow Google, who bought Nest to shut down the “works with the NEST program/ API”. If they do it will probably mean less support for third party devices. It will also mean that I will be looking out for a new ‘homey’…

In the meantime, my collection of connected- / smart devices keeps growing. I now have:

I now have over 50 smart devices, with multiple functionalities, and I am creating scenes to combine automations. For example a bedtime scene. I kick that off with a voice command (you can fully automate it as well) which triggers all the lights in the house to be turned off, the thermostat set to 18 degrees Celsius, the tv’s turned off and the alarm armed.

My smart home is still evolving and I am adding new devices every month or so. Some projects in the future are:

A smart home is good fun. It will cost you quite some time to figure out what works with what, and of course, what works for you. It can cost a lot of money, but there are interesting new players (not all Chinese) that offer serious value for money.

Before you set out, consider how you feel about your data being used by for example Amazon or Google, or other parties. If you don’t want that kind of intrusion, then some of the out of the box home automations are not an option. You will have to be a bit more creative.

And, on a final note, be aware: it is kind of an addiction. If you start automating you will probably buy more and more new devices. My family still thinks that I buy too many smart devices. But hey, what can I say? It is to make their life better 😉!