If you’ve ever written more than a few lines of Java code, odds are you’ve also written JUnit tests. JUnit is the testing framework most of us use.

I recently found myself tasked with migrating several hundreds of JUnit 4 tests to JUnit 5. Being a developer, I started looking for ways to automate this. To my surprise, I couldn’t easily find an existing tool to do this. In this post, I’ll show you what solution I came up with, and how to use it.

Please note that this post does not attempt to argue for or against migrating your suite of unittests to JUnit5, it assumes you’ve already made the choice to do so. It also assumes you use IntelliJ IDEA as development environment.

Under the hood, the solution this post describes uses a tool that is older than I am: Awk. If you’ve never heard of Awk before, do yourself a favor and read the excellent Awk in 20 minutes. If you know it, and you’re thinking “Is Awk the best tool for the job of modifying code?”, the answer I’d give is “Maybe not, but it’s simple, and it works well enough.”

With that out of the way, let’s dive into the solution I came up with!

Where can I find it?

The source is available on Gitlab: https://gitlab.com/techforce1/migrate-to-junit5.

What does it do?

How do I run this?

From within the root of this repository:

Use the docker image

From within the root of your project’s repository:

When it’s done, it’ll print a list of all files it modified.

Add dependencies to your pom.xml

You’re going to need to figure out on your own where you need to put what dependency, but here are the ones you’ll need most often:

Occasionally, when you use the MockitoJUnitRunner, you’ll also need to add the following dependency:

In IntelliJ: format your code and optimize your imports

What’s probably the best way to do this, is through the use of the Version Control view:

Then hit whatever shortcut you have for formatting code (probably something like CTRL+ALT+L). You’ll be presented a dialog asking you what you want to do. Configure it like so: 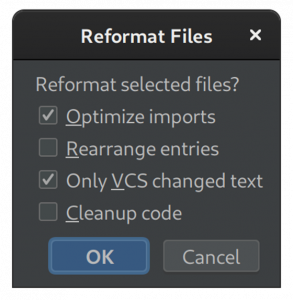 So, as part of the migration, any usage of  @Test(expected = SomeException.class) gets turned into a test that calls  assertThrows(SomeException.class, () -> {/*test body goes here*/};). Sometimes, the original test consists of a single expression, which means the curly braces introduced by the migration aren’t necessary.

Thankfully, IntelliJ can fix that for us.

Then press Enter, and run the inspection on all Uncommitted files: 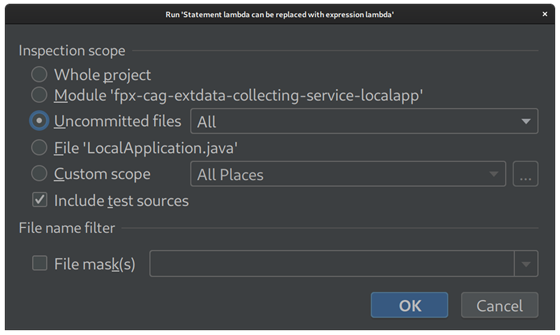 Finally, in the Inspection results view, if the inspection found anything, select everything (CTRL+A) and click the button that says Replace with expression lambda:

Since creating this solution, I’ve become aware of a few alternative solutions. Here’s a summary of the most interesting ones: